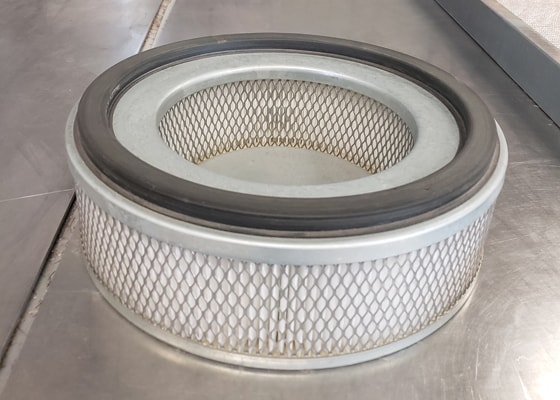 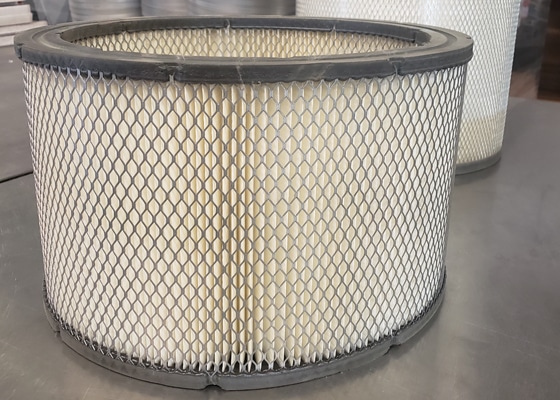 Call for pricing and details 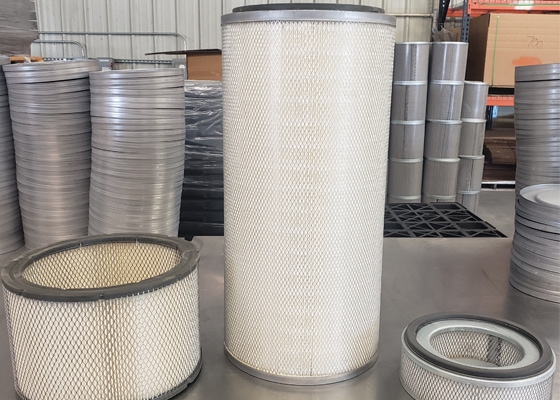 All sizes of buses and models can be made to fit your air intake filter on bus applications.

Call for pricing and sizing 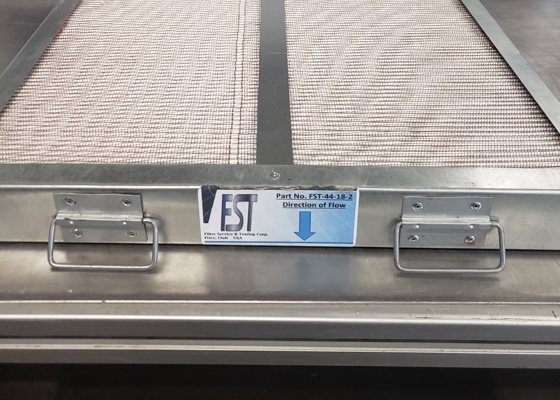 Currently used by the Grand Coulee Dam in Washington

Call for pricing and applications

In response to questions raised by some in regards to the suitability of the FST filters to be used on diesel equipment in operation in underground coal mines we have attempted to answer the commonly asked questions and provide direction to the facts and studies that support these answers.

Listed below are the most Frequently Asked Questions we receive.

Q: What are the health and safety aspects of continuous filament glass fiber inhalation?

A: Airborne continuous filament can be inhaled. However, the potential for inhaled glass fibre to cause any health hazard depends on its “respirability”, i.e. its potential to enter the lower regions of the lung. Indeed, the essential feature of a health and safety assessment for the product is to determine whether it is possible for the product to cause lung disease through respiration.

Fibres with diameters greater than 3 microns, which is the case for continuous filament glass fibre, do not reach the lower respiratory tract and, therefore have no possibility of causing serious pulmonary disease.

According to the WHO definition, respirable fibres have a diameter (d) smaller than 3 microns, a length (l) larger than 5 microns and a l/d- ratio larger than or equal to 3. Continuous filament glass fibres do not possess cleavage planes which would allow them to split length-wise into fibres with smaller diameters, rather they break across the fibre, resulting in fibres which are of the same diameter as the original fibre with a shorter length and a small amount of dust.

In 1987 IARC (The International Agency for Research on Cancer, a division of the World Health Organisation (WHO)) classified continuous filament fibreglass as not classifiable as to human carcinogenicity (Group 3).

In recent years, several major reviews have been undertaken by various expert international organizations on the health and safety aspects of glass fibres. The first of these was conducted by the International Agency for Research on Cancer (IARC) in 1987. The purpose of the IARC review was to determine whether these fibres are carcinogenic to humans. At that time, IARC concluded that continuous filament glass fibres are not classifiable as to their carcinogenicity to humans (IARC classification Group 3). In October 2001, after a comprehensive review of more recent human epidemiology and animal toxicity data, IARC concluded that the classification of continuous filament glass fibres in Group 3 is appropriate, confirming that there is currently no evidence for the carcinogenicity of continuous filament glass fibres to humans (IARC Monograph Man-Made Vitreous Fibres Vol. 81, 2002).

A: Glass fibres are a high technology product. Continuous filament glass fibre is produced by a continuous drawing process through the calibrated holes of bushings at constant speed, thus leading to a very narrow variation in filament diameter.

Q: Will the glass fibers in the filter media break off, fall apart and become a carcinogenic health risk to people?

A: The FST filter elements reinforce and support the glass fibre filter media with wire gauze. The filters block and clog long before any degradation of the filter media occurs. A number of filters have been reused and tested a number of times without any observed degradation of the fibres. The filters when used in the USA mines are subjected to exhaust pressures of up to 14.95kPa (60” H2O) in Australia the maximum back pressures currently allowable are 10kPa

Glass fibre has been commercially manufactured and marketed for more than 60 years. During this time, it has become one of the world’s most useful and beneficial man-made materials.

FST filter media is manufactured from continuous filament glass fiber which is produced in long, continuous strands or filaments.

The predominant glass composition for continuous filament glass fibre is known as E-glass. It accounts for almost all the world’s production of these glass fibres.

A: Why do high temperature glass fiber filters take time to stabilize and reach their operating efficiency, how long does it take and why do they condition exhaust filters in the USA prior to testing them?

The current MSHA test procedure requires the filters are run for a short period to condition them. This conditioning cycle is repeated the same way every time and is around 50 minutes.

This is done because no filter will perform to its full potential when new and first installed. By design all filters become more efficient during service until they eventually block. Including in the test procedure a short conditioning period assures that good filter performance is obtained within a short break-in time. This eliminates filters that require excessive operational time before their performance stabilizes and they effectively filter out DPM.

Recent trails of the FST filters in an underground coal mine in Australia where our filters were installed after water bath scrubber indicated they were up to efficiency and stabilized within 30 minutes of installation.

Q: Are filters with fibreglass medium effective and efficient at filtering out diesel particulate matter?

A: For MSHA to pass a diesel particulate filter for use on explosion protected (permissible) diesel engines as compliant to its standard any filter must perform equivalent to the standard filter element they have previously tested and determined reduces the particulate make to 2.5 grams per operating hour.

The latest study in 2011 (The evaluation of High temperature disposable exhaust filter elements in an experimental underground mine) carried out by respected researchers and published by the Society for Mining Metallurgy and exploration found these filters to be; “After an initial DFE degreening period,the filtration system with all three DFEs was found to be very effective at reducing total mass concentrations of aerosols in the mine air”. The results show that, in all cases, the DFEs reduced the aerosol mass concentrations for R100, I50 and I100 modes(engine operating modes) by a factor of 20 or more (>95% reduction). However, at R50 the reductions were less than 90%”

For the study DPM or aerosol readings were taken simultaneously using :

The study states the findings in regards to ;

A: The short answer is no. The filter media is made from glass fiber so is not flammable. When the filter medium is tested for ignitability both a clean unused filter and a filter contaminated with DPM is tested to see if it is possible to ignite it.

Upon the completion of the testing, it was discovered that the diesel particulate matter (DPM) combined with fuel/oil collecting on the filter media was the material that had ignited and burned, not the filter media. This ignition occurred at temperatures above 650°F (343°C). Test conducted with DPM loaded filters with no additional diesel fuel and lubricating oil added returned ignition temperature results in excess of 1000°F.

All explosion proof (permissible) diesel engines approved for use in underground coal mines and equipped with wet scrubbers in Australia and the USA must be fitted with temperature sentinels that shut the engine down if the temperature of the exhaust gas exiting the scrubber exceed 77°C.

The FST high temperature filters are rated to 343°C or 150°C depending upon the sealing material used on the end of the filter or the filter canister. Other filters currently in use in Australia are rated to between 100°C and 150°C.

Q: Is the testing conducted by MSHA as comprehensive or as good as that done in Australia and are their underground diesel engine standards different?

The rules and regulations they have regarding diesel engines used in coal mines are the same as Australia in regards to 150°C surface temperatures, 77°C scrubber outlet gas temperatures and the emission testing follows the ISO 8178 Reciprocating internal combustion engines—Exhaust emission measurement off road test cycle referenced in AS3584 Diesel engine systems for underground coal mines and MDG27 Guideline for the management of diesel engine pollutants in an underground mine.

Q: Why is the MSHA test of filters to reduce emission reductions carried out using a dry heat exchanger and not a wet scrubber?

A: Testers have found that the performance of the filter can be effected by the water that is present in wet scrubber exhaust systems. This is due to the water either becoming trapped or absorbed by the filter medium which can cause it to swell. Additionally it has been found that laboratory DPM testing after a wet scrubber produces inconsistent and variable results making comparable analysis of filter performance inaccurate.

MSHA tests new or altered filters (or media) by comparing the candidate filter to a standard paper filter on which their DPM rule was based (2.5g/per hour) This is done in order to directly compare the performance of the new filter to a standard media. This method avoids issues such as assigning an efficiency value to each media, which is undependable, as any efficiency percent (and final DPM output) assigned is very dependent on the test engine emissions and after treatment conditions, and one setup used for testing may not yield the same result as another in terms of percentage reduction.

Testers use the same engine, exhaust treatment, and filter canister, etc. for all tests in order to reduce variability to a minimum. When tested the performance of a media is compared to the standard filter in back to back tests under the same sample conditions. If they show equivalent results, then the new media is deemed in compliance and the filter is added to the list and can be used to meet the requirements of allowable DPM emissions.

Q: Do you have delivery service?

A: Yes, delivery service is available throughout the inter-mountain region. Motor freight can be arranged at discount rates outside of this area. Generally same day shipping can be arranged.

Q: What are your store hours?

What’s the right filter for your home?

Take the 2 minute air filter
quiz and find out!

MERV numbers indicate how many particles they trap, with higher numbers trapping more particles per the chart here.